Fresh off the press! Discover how EU Delegations across the world work with towns and regions

In a brand-new study, PLATFORMA goes one step further in strengthening the relationship between local and regional governments, their national associations and the European Union. It examines how EU Delegations already engage with towns and regions and what their views are on tightening relations further in the future as effective actors for development cooperation.

The study compiles the answers of 53 selected EU Delegations in partner countries to a survey sent out by PLATFORMA. The surveyors reached out to all the EU Delegations which have a development cooperation unit and asked them for feedback on projects, as well as their methods and views on cooperating with the local level. 17 of them were directly interviewed.

“The new Neighbourhood, Development, International Cooperation Instrument (NDICI) will give the EU Delegations greater leeway to determine how best to allocate funds at country level.” said Frédéric Vallier, Secretary General of the Council of European Municipalities and Regions (CEMR), lead partner of PLATFORMA. “This development has provided us with an opening to rethink how we, local and regional governments and representative associations active in development cooperation, work with the EU Delegations,” he added.

The new study presents and analyses 273 projects undertaken by EU Delegations. All the projects analysed bring up the variety of ways to empower and support local and regional governments, their national associations, and more broadly, the decentralisation processes.

The study shows that decentralisation seems to be a growing trend worldwide, with some different regional tendencies. Some of the main obstacles to decentralisation are also analysed. In some cases, decentralisation is not a political priority for the partner country, in others limited resources prevent the implementation of decentralising reforms. Moreover, domestic political fragility can also represent a hindrance.

The new study also suggests to the EU Delegations how they can benefit from partnerships with decentralised cooperation actors.

Learn more by reading “The work of EU delegations with local and regional governments for development”.

Also available in French and Spanish. 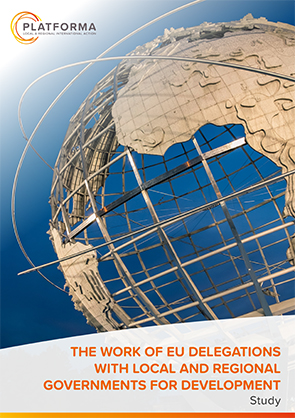